The Evolution Of Our Themes

The Evolution of our Themes

Every chapter of IllumiNaughty takes us to a different world, through an evolving storyline that never stays the same, and never follows the norm. New decor and installations are designed and built for every event, brought to life with unique choreography and performances. As Sugar Rush fast approaches on the 5th March, at Troxy in London, we have a look through our most iconic themes, and how they have progressed to the current day:

IllumiNaughty was formed in 2006 in Manchester, transforming clubs across the city into psytrance jungles. The most recent events in the city were held at the 5,000 capacity Bowlers Exhibition Centre, letting attendees explore 5 rooms of different musical genres and immersive experiences. The event ‘Underworld’ was held in 2017, and built a main stage from a 15 meter wide medieval castle that transported us back to the world of knights and legends, with Vini Vici, Sesto Sento, Juno Reactor and many more. Backlit gothic windows illuminated the castle in different colours, heated up with fire cannons from the turrets. The second room was held in a true steampunk era, watching over the denizens with a fully functional giant clock. 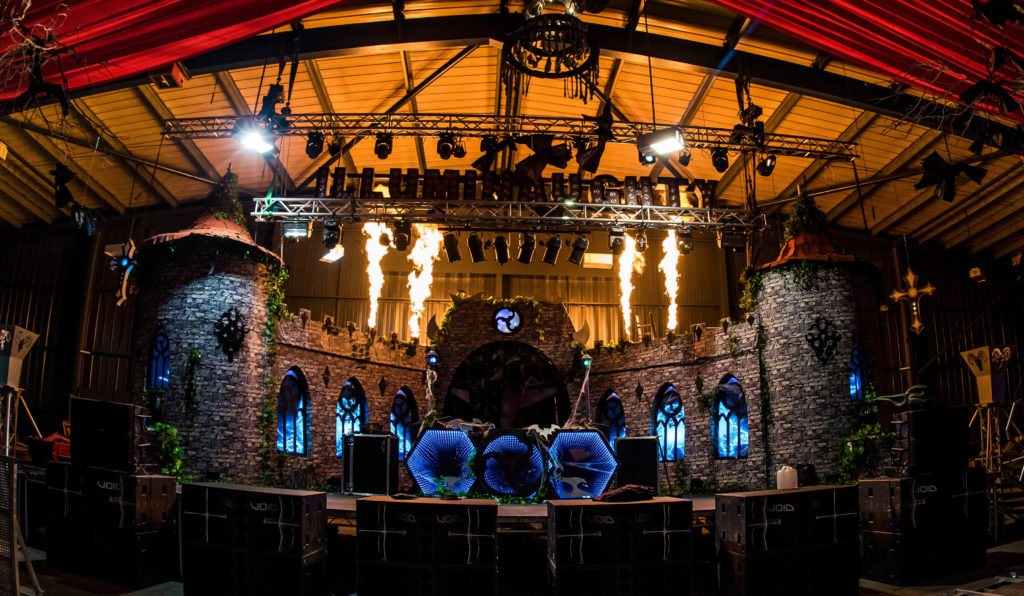 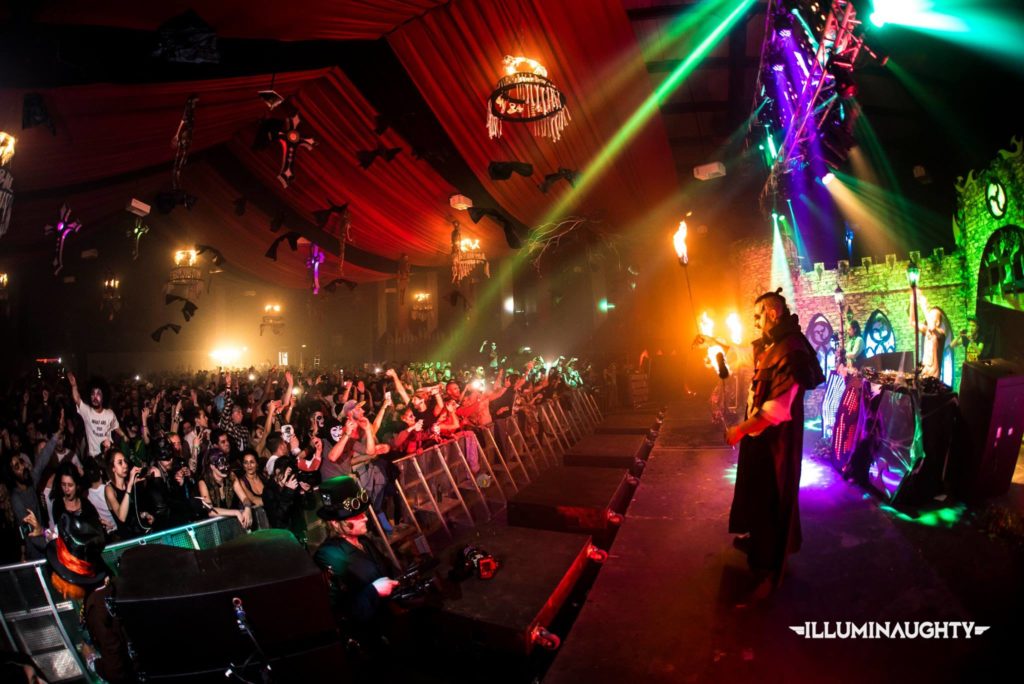 Through The Looking Glass: 2018, Troxy London

One of our most colourful and eclectic themes, ‘Through The Looking Glass’ took the Troxy venue in London down the rabbit hole, and let us get lost in the world of Alice and her unhinged cohorts. Avalon, Bliss, Daydin and more blasted through the perfect psytrance stories that fused with the dramatic setting. The stage was drenched in every shade of amaranth red to cerulean blue, in front of an infinity of LED animations, glowing toadstools and fairytale trinkets. The event was finalised with a showdown between the good and evil of the Looking Glass with fire swords and the Goblin himself. 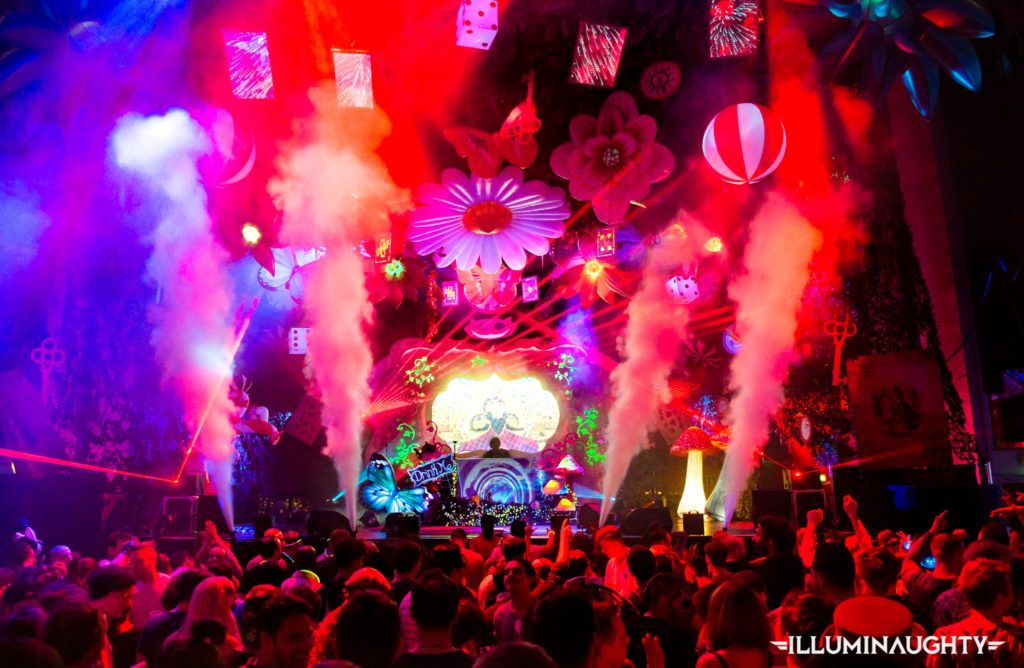 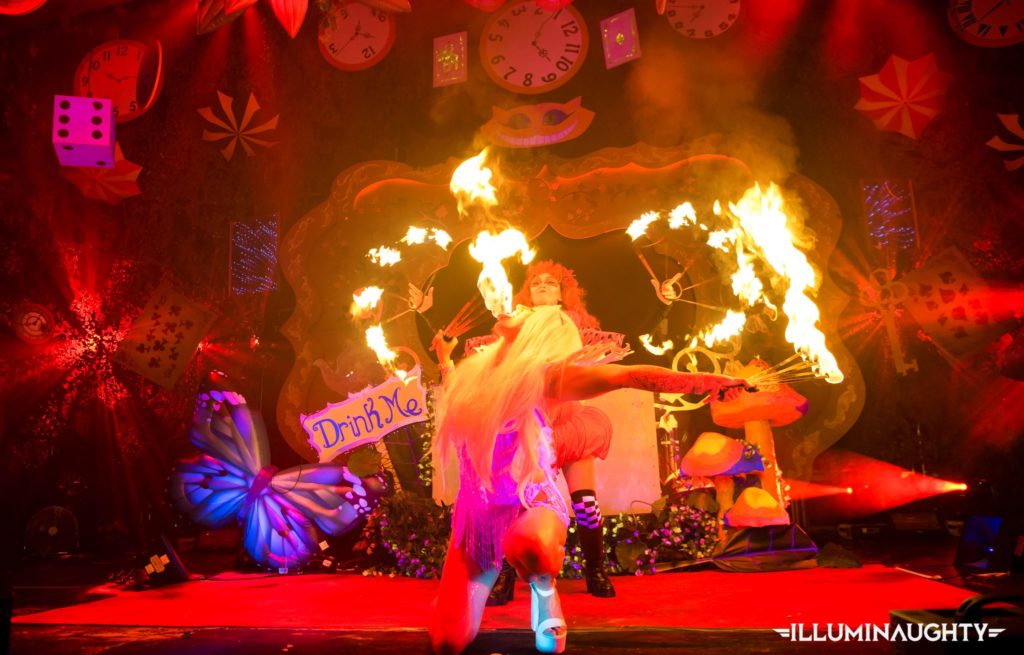 The ‘End of an Era’ show at Bowlers Exhibition Centre in Manchester marked the last edition of our current shows in Manchester, re-imagining the main stage into a psychedelic church. A stained glass canopy immersed the venue into this Halloween show, that saw the most elaborate costumes and makeup turn up with our attendees. Painters, exhibitions, fairground rides and stalls created a carnival atmosphere throughout the 5 rooms of Bowlers. This event with Astrix, Morten Granau, Ed Rush & Optical and many more marked a true End of an Era. 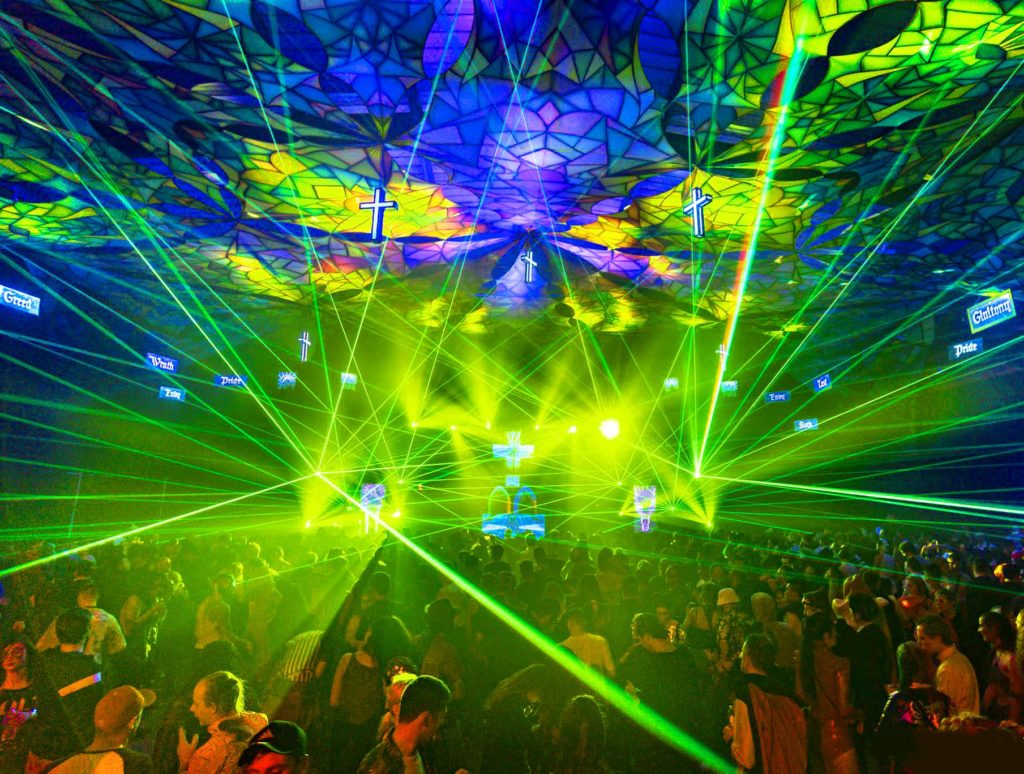 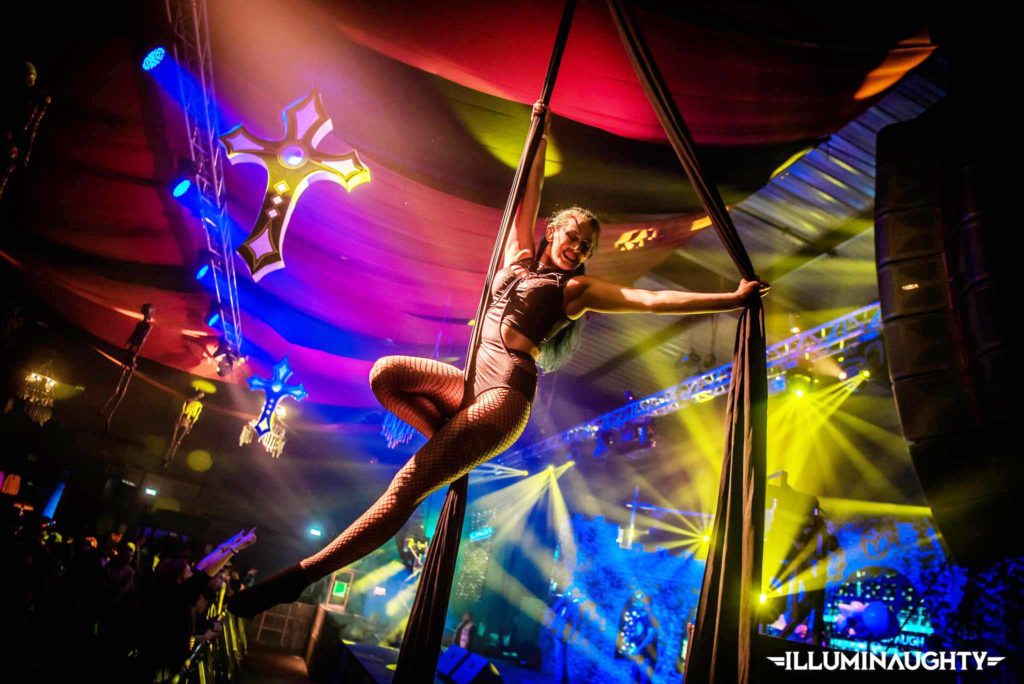 None other than Infected Mushroom flew into London for the Gatsby themed ‘Mobster Tales’. A stage setting from the roaring ‘20s with gold curtains, casino lights, game dice, martini glasses and gold leaf palm trees transformed Troxy into the decade of decadence, that let the legends of psytrance bring a full power sonic journey. Dancers with classic flapper dresses and pinstripe gangsters presented their own version of the prohibition era with tricks and treats. 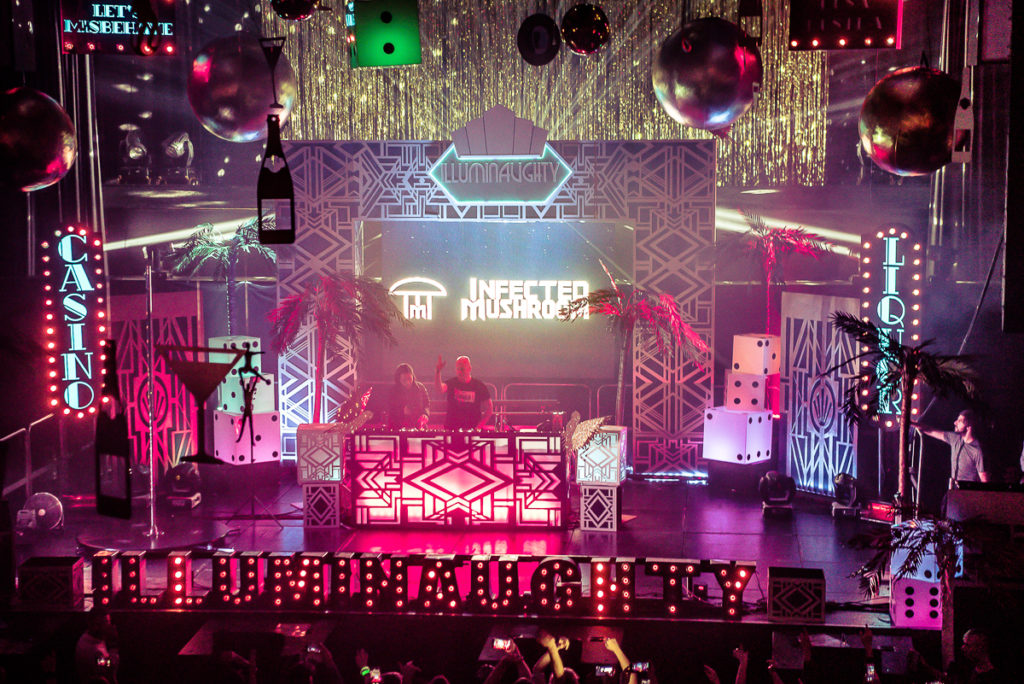 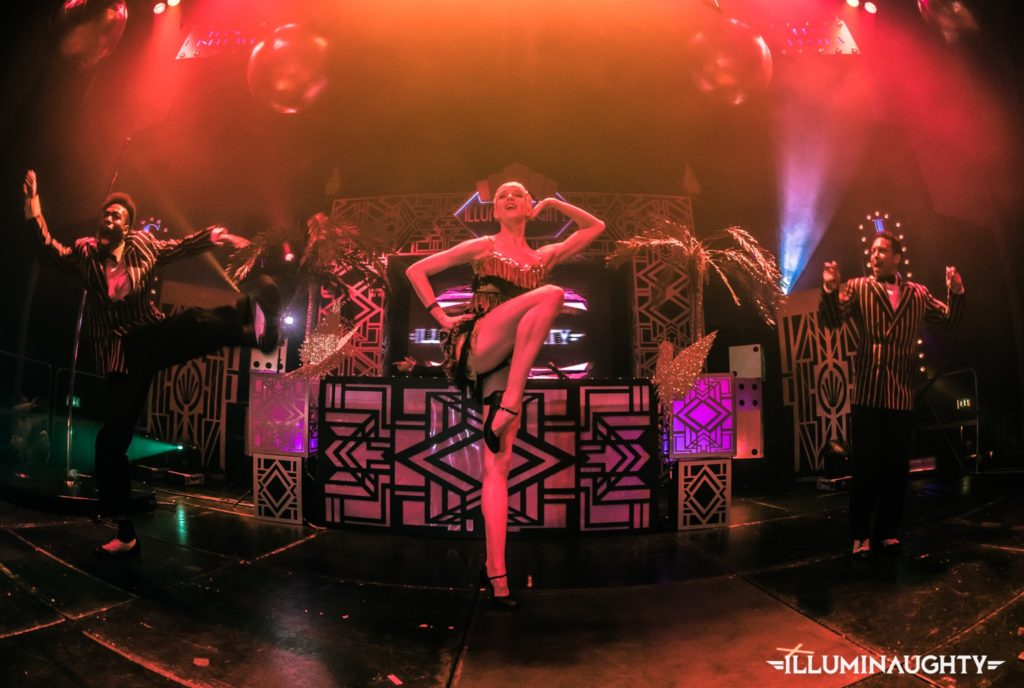 We escaped to a world of electric underwater dreams. Deep in the ocean, technology was fused with life to create a kaleidoscopic fantasy. Beautiful and unique, the aquatic world grew out of control and vivid coral fluoresced with fibre optic vines. A truly wild adventure into the unknown, the lineup of Neelix, Blastoyz, Nikki S and more created an electric atmosphere throughout the night. 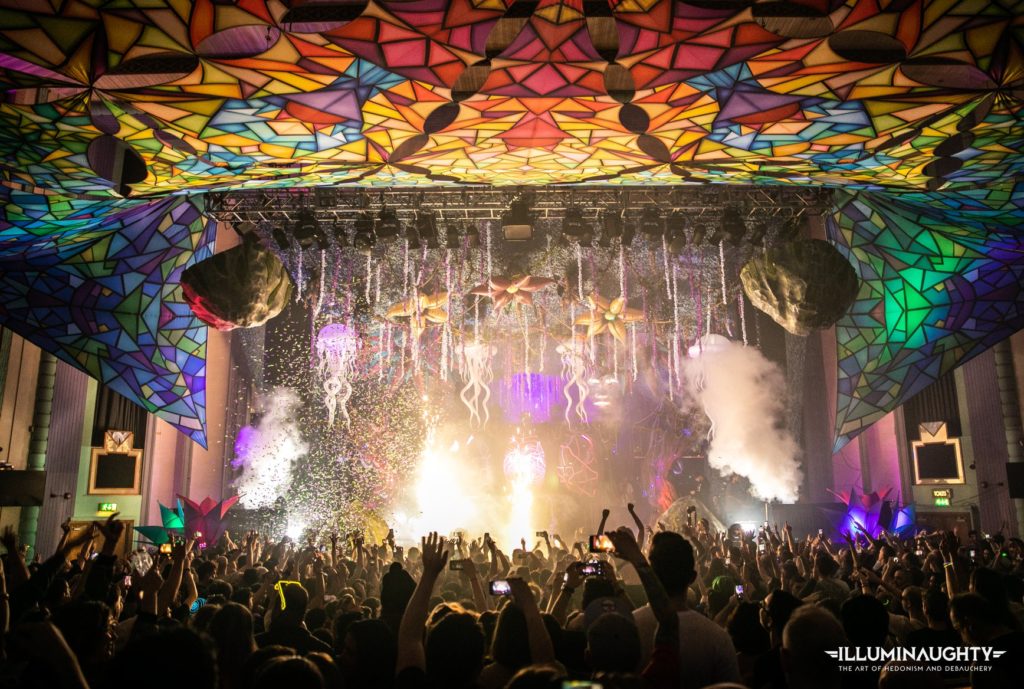 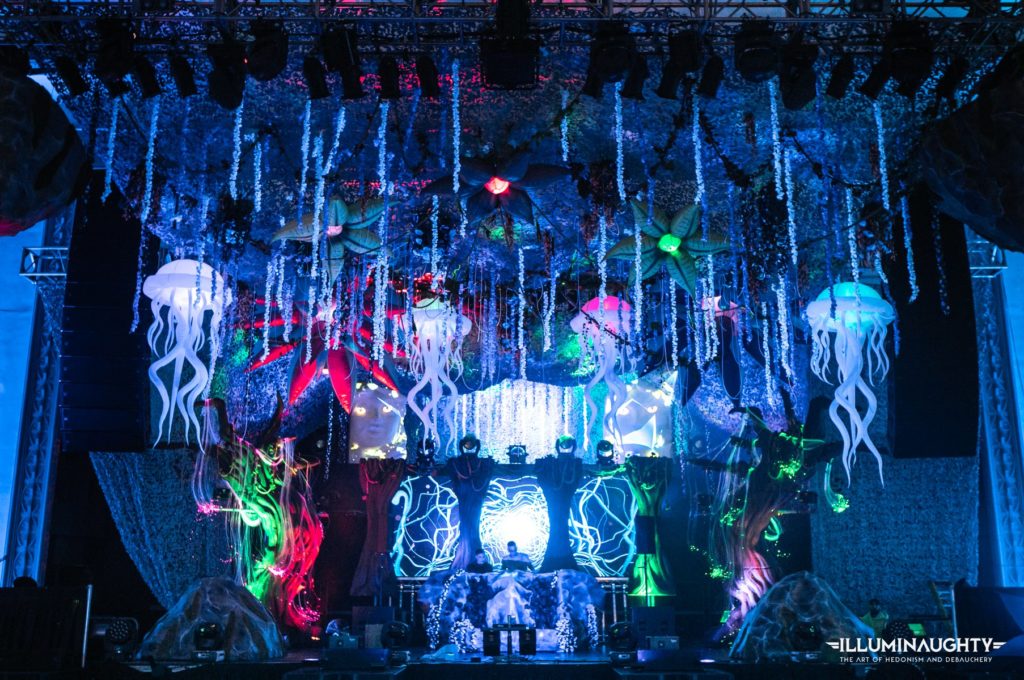 Diving into the hi-tec world of a neon society, run by artificial identities and the neo-traditions of the underground. Troxy was transported into a dystopian future of far-east Asia, with a stage transformed into a fluorescent city landscape. Skyscrapers towered above the technicolour streets and glowing metropolis. An authentic feel with traditional martial arts performers was enhanced with a laser show for a complete neo-Tokyo effect. Ace Ventura, G.M.S., 3 of Life, Pixel and the IllumiNaughty DJs locked into the system for the whole night. 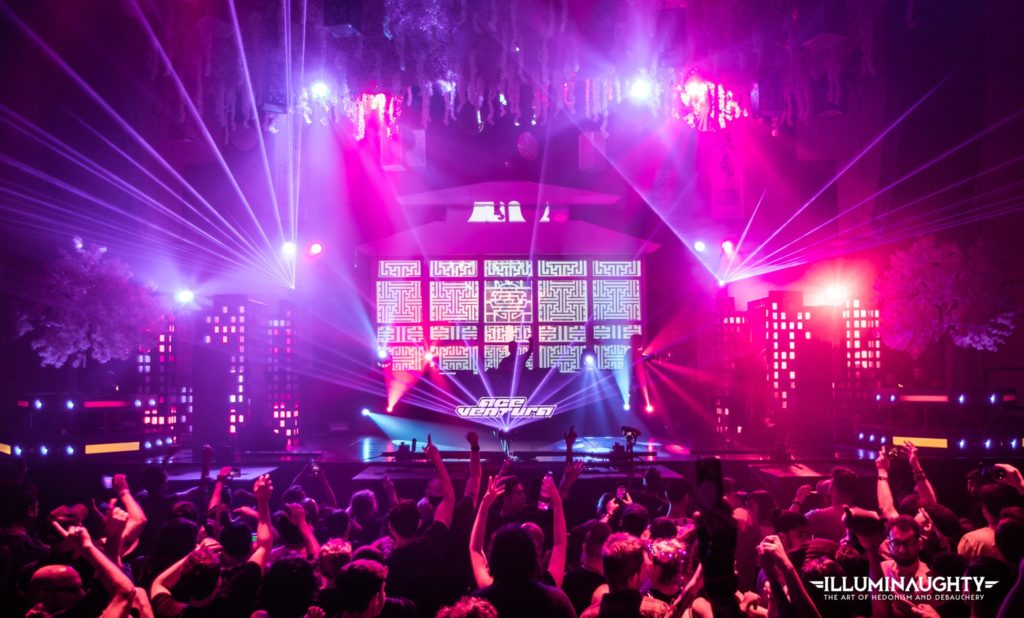 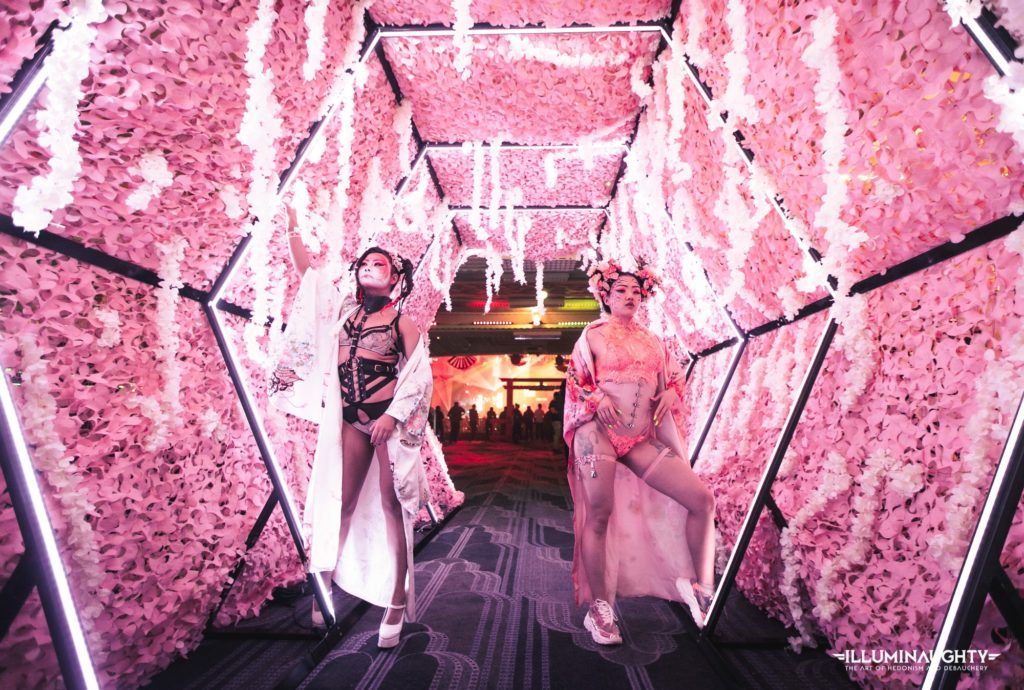 Shamanic Tales is our most recent event in October 2021, the first event after the pandemic. After a year and a half pause to event production, it re-imagined the IllumiNaughty style into its most dramatic vision yet, with the latest 3D visual mapping technology over two Shamanic figurehead structures. Mapping animation provided by Global Illumination took evolving visuals to new heights, underneath a neon canopy of glowing shapes and moving to the sonics of Astrix, Out of Orbit, Juno Reactor, Static Movement and the IllumiNaughty DJs. An event which sold out in advance, it brought the IllumiNaughty world back into a new era of events. 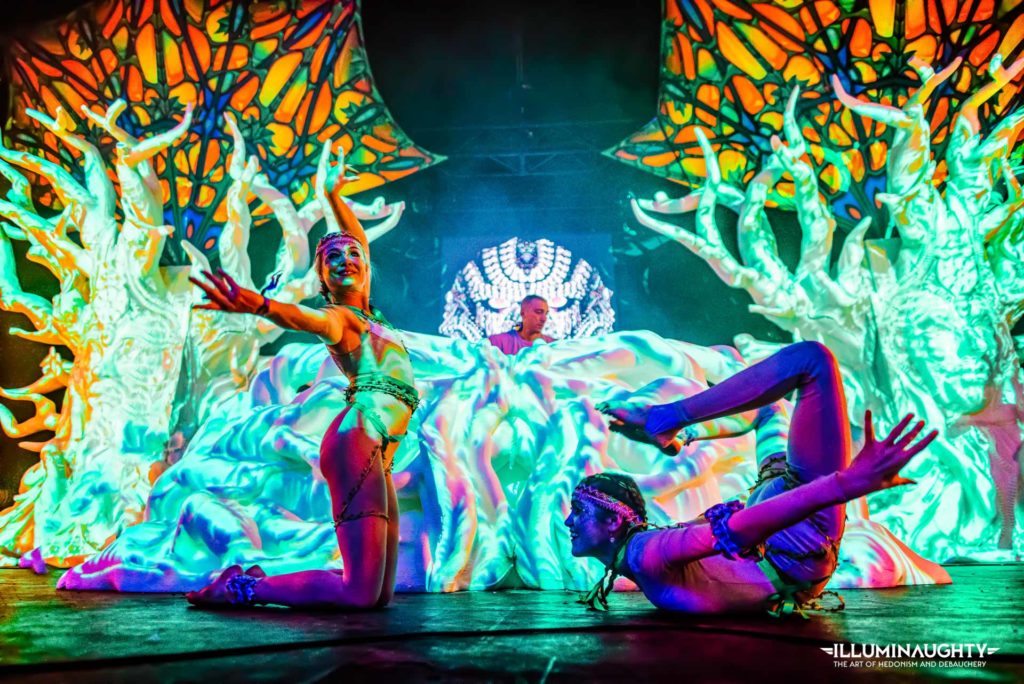 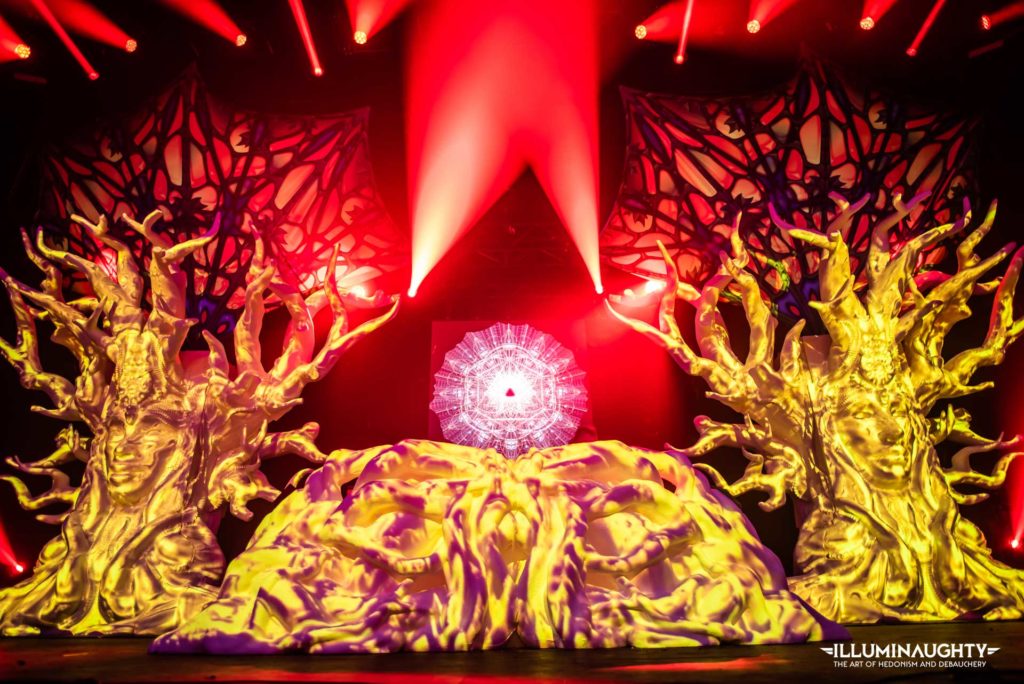 What will be in store for IllumiNaughty pres: Sugar Rush? Our next event in London at Troxy, on the 5th March 2022. A surreal landscape of twisted candy and confectionary fused with un-reality, a setting which can only be seen from a different perspective. Neelix, Ace Ventura, Talamasca, Liquid Ross, Neutrino, Montez and DJane Anastazja are about to melt the candy stage with their varied, progressive and nonstop beats. For full event info click here: SUGAR RUSH EVENT